“A Journey of a thousand miles begins with a single step”
-Lao-tzu.

I wasn’t sure where to begin or how to start this website. So I decided to start where, in a sense, it all began. Kind of in the middle. That makes sense right? I’ve been working as a travel consultant for India travel for several years and have been a solo traveler even longer. I am now excited to create this new adventure with my new site.

Here is a little of my story…

I made a trip to India with a leadership program I was in about 10 years ago and it changed my life. This change began sort of in the middle of my life. Well, not quite the middle, a bit earlier than that but I had already had a marriage, a full life and a home before this sudden change in direction planted its seed and so sometimes it feels like it happened squarely in the middle.

In any case, I have had an idea or feeling since I can remember, it lived inside for a long time and it comes to me more than ever as I navigate and have been navigating some big life changes. That notion is that we are all part of the Big Picture. Each one of us is a piece of an ever changing puzzle. We, each and every one of us, make up a piece of this puzzle we live in and we can create a beautiful picture or an ugly one. We travel through life together connected in seen and unseen ways and when we come together, in bits and pieces, we can create something magical if we wish to, like scattered pieces of a puzzle coming together

The experience I’m about to tell you made me come back to this idea over and over and to finally start to respond to it.

The “middle” of my story begins with my first overseas trip and a woman.

I had been interested in India for a long time and really the idea of travel in general but never had much opportunity to pursue that passion. When I finally had an opportunity to go to India it was my first time truly out of my own country. I was surprised at how comfortable I was. It felt immediately like I was home. The flight, the bus after arrival, the smells, the colors. I can say that I felt more at home than I had felt at any other time in my life. I certainly felt more alive than I had in years. I was on a 3 week trip with my educational adult leadership group and it would take me another three years to come back to India and begin what ultimately became a life transformation.

Somewhere in the middle of the 3 week tour we went to stay at a nonprofit center in South India for a few days.  One day I was with a smaller group and we went to a remote village in the evening. The villagers laid out their finest things for us. A small table, a few chairs, some candle light and their smiles. We were there to learn about them. It was the first time they had interacted with people outside of their village let alone people from another country. They understood why we were there, it was basically to observe them. It became obvious within the first few moments that they had no desire to let us see them as weak or impoverished in any way. They were cheerful and made us relaxed. This particular village was made up of mostly women. Many husbands and sons had gone to the city to try to make a living and most never returned. We were there to learn about one of the first women’s cooperatives in India, which they were a part of. These women produced hand crafted goods, sold them and put all of their earnings into a central “bank” and that money went to help each individual family when needs arose. This is now very common but at the time it was a relatively new concept.

This is not exactly why I am telling you this story.

I am telling you this story because of well, pictures.

At the time of our visit we all had digital cameras and like all digital cameras you could show the picture on the back of your camera after you took it. At the moment that the first person in our group flashed his or her camera all of the children came running to pose. It seemed the children had never seen digital cameras before and loved seeing their picture just after it was taken. We were swarmed. Most of the ladies, however, weren’t sure. They smiled but didn’t really look to see the pictures at first.

Then this moment happened.

I was in a woman’s humble home and she was showing me her small television, her modest kitchen, was even explaining how she wished they could have a toilet facility, when I asked if I could take a picture of her. I wasn’t sure she understood my English but I took the picture and showed it to her. She looked at the picture on the back of my camera, smiled and then brought her children close and waved to me. I then took a picture of her and her children. She looked at that photo, hugged me tightly and a few tears came to her eyes. Then she showed me a mirror. It was a very small mirror hung in her kitchen where I could see stick tooth brushes, a comb and some hair oil. She brought her children by her side and pointed to the mirror. I immediately understood that was the only way she had ever seen herself with her children ever before. The picture I took, it turned out, was the first time she had seen herself and her children together in a photo. Her children were young teens.

We left her house and joined the rest of the village for our welcome ceremony. There were a few men, a lot of children, and some amazing women who danced and sang to us and laughed and made sure we didn’t think they had anything to worry about. Their simple lives were ok by them, they had immense strength and they found ways to celebrate all of it.

We returned to our rooms at the place where we were staying and I went to change my clothes when I suddenly fell and I wept. I was overwhelmed. I cried like it was the end of the world. I couldn’t stop, my entire body was immobile. Was it two weeks in India and travel and so many people and new things to see? Or was it the fact that a few women, with nearly nothing as compared to what I was used to, who had never had a picture of themselves with their children as so many of us grow up having, were so loving, accepting and happy? I know without a doubt it was the one woman. The woman who showed me how important it was to her to see a picture of herself and her children on a small screen. She didn’t want a copy, it was enough for her to see it, just that one time. I thought about how many times I took my life for granted, how many people I knew who took their lives for granted, how many times I was not satisfied with nearly anything! And… I cried and I cried. It took my best friend and a few others in my group some time and compassionate understanding to help me stop crying and calm me down. Without knowing it at the time, that woman in the village began my new journey and the many changes in my life since. I know, I fully know, I have yet to do her and the gift she unknowingly gave me justice.

My hope now is to find a way to share this idea that in the big picture of life we all play an important role. We are all travelers in one sense or the other. We all have our own stories to share. It’s never perfect, but if we pay attention we might be able to make someone else’s, as well as our own, piece of the puzzle a little brighter, a little lighter and in turn we make the whole picture even better.

There is so much to explore, so many ways to connect, so much to experience and so much to share. I hope you will join me on the ever changing journey of the Big Picture that is life. With open eyes and open hearts we can change the picture to be more positive, one piece at a time. The first and maybe most important piece is our own.

“We live in a wonderful world that is full of beauty, charm and adventure. There is no end to the adventures that we can have if only we seek them with our eyes open.” – Jawaharlal Nehru

“Perhaps travel cannot prevent bigotry, but by demonstrating that all peoples cry, laugh, eat, worry, and die, it can introduce the idea that if we try and understand each other, we may even become friends.” – Maya Angelou

I love quotes and this is one of my very favorites. Travel really does open our eyes, our hearts and our souls to new ways of seeing each other and even ourselves. A change of perspective, a new understanding or a change in view can open so many more doors and enrich not only our lives but the lives of those we touch.

India is one country that certainly opens people up to discover their own thoughts, beliefs and perspectives in new ways. That is one reason why I like it so much!

Explore, Experience and Connect. The world is Yours to do just that. 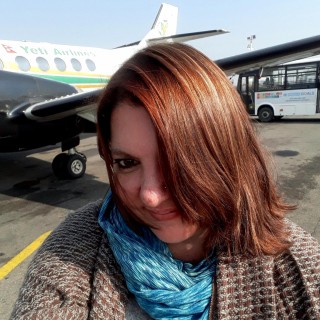 I am a Travel Designer, event planner and writer specializing in India travel for the western traveler. I am passionate about immersive and sustainable travel and believe travel is the best way to create positive change.